An Ambiguous Approach to Explaining Metamaps

In my last post, I lied when I said the phrase 'localized projects'. Metamaps has in so many ways always been a non-localized project, emerging non-linearly in time and space. An important phrase for myself and Ishan in our collaboration and work has always been that 'ideas are of our environment', and certainly Metamaps is of its environment. I find this important to share because in the culture of technology startups it's so predominantly a model of individual ownership and control of ideas, and it can be difficult because we work on a technology project to disassociate from that.

If I were to tell the story of how Metamaps came to be from a me-centric place I would probably start off something like this. (If you like, you can imagine me saying it in this lower pitch voice of Phil House, co-founder of the recent 'Yo' app, in which he illustrates how saying 'yo' was his idea.)

"Yeah so I did these designs in February 2012 and I programmed a little prototype... then I came back to it on September 18, 2012 and picked up the programming, and spent till Oct 3 working on it, at which point I invited Ishan to the test site that I had set up with the prototype and that's when he joined me to work on this project together."

A lot of me's and I's in there... ultimately, although I was the one writing the actual code to materialize something, what was materializing were actually ideas that had long floated around the internet regarding how computers, and the internet can be used as tools for sense-making our own individual, and collective experience. For years already, Ishan had been part of that conversation, and although I didn't know him by a real name, I knew him by his online presence.

For example, during 2010 and 2011, I had found my way at some point to the domain name 'metamaps.cc' and found there a blog, regarding evolutionary cartography. Look at this post by Ishan from July 7, 2010: Amplifying Emergence http://blog.metamaps.cc/amplifying-emergence-gen002/
Not so different from the look of a metamap on the platform today... http://metamaps.cc/maps/620
The synapses are unlabeled and the metacode icons are older versions is about what it boils down to.

What eventually happened is that when Ishan and I started collaborating, we moved the blog to blog.metamaps.cc, and the platform in development to metamaps.cc.

The thing to know about the image in Ishan's blog post, is that it was an export from a computer application Compendium that he was using at the time to build maps like this. I can happily say that eventually Ishan switched from using Compendium to the platform we ourselves were developing. And although I myself have hardly ever used it, I'm not unawares as to how much the work I've done has been influenced by it. The other notable thing is the metacode icons. There's many stories to tell about these icons, but I'll leave it at saying that I believe it was around this time that Ishan was collaborating with Gavin Keech to produce these icons in the first place, wanting a specific set of highly re-usable signifiers relevant to personal and collective sense-making. (perhaps I'll write a full post about "sense-making" later, it can be a dense phrase). I really believe that during those years, along with how fascinating the ideas were to me, it was Gavin's stunning graphic design work that acted as a constant attractor to me to involve myself with him and those he was working with.

So now you see that by the time "I did those designs" in February 2012, I had already been heavily influenced by the other ways that I had seen the icons being used online... I was just talking about some ideas for making it interactive. Let's fast-forward again to October 2012. From that first day in September that I sat down to code again, my intention was to put the skills that I have in my head and my hands to work on behalf of the many, not the few. This made it funny when Ishan asked that day, "are you open to input for further development?", not knowing that not only did I want to work with him, and many others, but that I needed to. I would get nowhere with my goals working alone. First things first, Ishan sent me a zip with their good copies of the metacode images, to replace my downloaded and hacked in photoshop ones.

We immediately fell into an active dialogue and workflow. Ishan experimenting with the evolving platform and providing me a relevant stream of references (further down the rabbit hole than I had ever gone) to widen my view of the field. Me sending Ishan development updates, questions, requests and ideas. Where we were going, precisely, we didn't know, but we would get further together.

We wanted the collaboration to extend beyond ourselves. We moved quickly during October to set the site up at metamaps.cc and to make it so that others could set up accounts, and start participating in a collective development process. We launched what I would describe as far less than an MVP (minimum viable product-nay-platform) on October 31st. Hilariously, in an email we sent out to some of our contacts inviting them to the platform, I just stumbled across this text:

This quite nicely describes the first phase of the Metamaps project... those who were participating defined what was becoming. Fortunately, the project is no longer so intensely open-ended, though I think that the healthy aspects of the room for enthusiasm has continued.

It was to be some time before other people would join in our work, in the same way that Ishan and I were committed to it, minus a phase in those first months when another Waterloo local worked with me on some development. Keep in mind that still by October 31st, Ishan and I had never even met in person! However, a friend of his was so enthusiastic about the potential of the platform that he funded a plane ticket for me to LA in late November, where I stayed for a week and met Ishan and Marija (and California!) for the first time. I think that trip really solidified that we would be working together on into the foreseeable future. And so we are. And there are many more of us now. A real introduction to the platform, who's working on it today, and how we work together still to come. 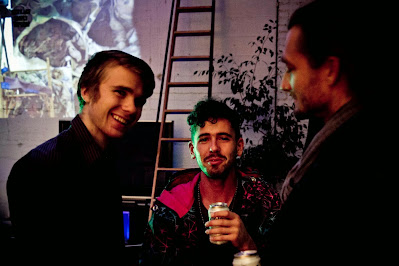 Ishan (middle) and I (left) at the Brewery Artist Lofts in LA where he lived during that first visit.

A little sidenote of interest, if you want to see what the platform looked like around that October of 2012 well... you'll have to set it up for yourself. Remember? We're open-source. https://github.com/Connoropolous/Metamap